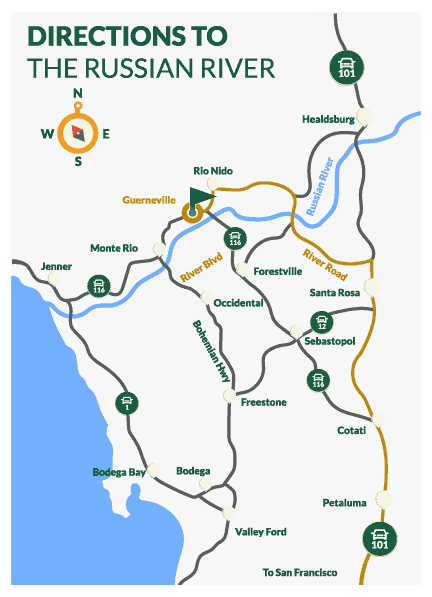 So close to home but a world away! Discover the Russian River region, an eco-vacation destination with something for everyone, just 2 hours away from the San Francisco area and Sacramento.

Guerneville - Known as the “Heart of the Russian River”, this town of roughly 4500 people is the largest of the villages along the Lower Russian River. Its many resorts, restaurants and shops have been welcoming locals and tourists for over 120 years. Guerneville’s biggest attractions are the Armstrong Woods State Reserve and Johnson’s Beach, as well as large festivals such as Women’s Weekend, the Blues/Jazz Festival and Lazy Bear Weekend.

Rio Nido – Back in the day, this village made its mark as the place to go for big bands, weekend dances and bowling. Rio Nido, (which means “river nest” in Spanish) is now home to some 2000 people and has a charming community of year-round and vacation homes nestled amongst the winding roads and dense redwood forest. Rio Nido’s main attractions are the Rio Nido Roadhouse, the Rio Nido Pool and the Rio Nido Lodge which houses local theatrical productions.

Forestville - This small town’s laid-back and comfortable atmosphere is the place to enjoy the good life. Although not directly located on the banks of the Russian River, Forestville connects the rest of West Sonoma County to the Russian River. Forestville is home to approximately 3300 people and features many great restaurants, El Molino High school, Burke’s Canoe Trips and Steelhead River Beach.

Monte Rio – This vacation wonderland was home to Sonoma County’s first elevator inside the Montrio Hotel and was made famous as the summer encampment of the Bohemian Men’s Club of San Francisco. Monte Rio’s dog-friendly public beach attracts hundreds of visitors and 1100 locals alike. The town’s biggest events are the Monte Rio Variety Show, produced and hosted by the Bohemian Club and the 4th of July Big Rocky Games and Fireworks show.

Duncans Mills – This enclave is the second smallest of the villages along the river, with only 175 people calling it home. Duncans Mills was best known for its authentic Northwest Pacific Railway train station which is now a Historical Museum. This charming small town is also known for it’s fine shops and spectacular Cajun dining.

Jenner - This small town sits atop the coastal cliffs overlooking the mouth of the Russian River. With a population of about 130 people, Jenner is the smallest village in the Russian River region. Its main attractions are two fabulous restaurants, the river estuary kayaking and the Goat Rock Sonoma Coast State Beach. Jenner is also an excellent spot for viewing harbor seals and their pups (at a safe distance, of course).

Occidental - A town built around the Northwest Pacific Railway train stop, Occidental has flourished into the small bohemian community we know it as today. Occidental’s restaurants, shops and close proximity to the world famous Sonoma Canopy Tours redwood zip lining course make it a must for a Sonoma County vacation.

Cazadero - This small logging town was first established as a hunting camp, growing until its population grew large enough to merit its own Post Office. Follow Cazadero Highway six miles to the small downtown where you can see the old mill grounds, the historic Hotel and the General Store. Follow the highway up the mountains where you’ll connect with Fort Ross Road which takes you through the wilderness, ending at Fort Ross on the coast.

History of The Russian River

The Russian River region has a long and interesting history. First inhabited by the Kashaya Indian people, the river was named after Ivan Aleksandrovich Kuskow of the Russian-American Company, who explored the river in the early 19th century establishing the Fort Ross colony just northwest of the mouth of the river. In later years, the area began seeing more settlement due to the Gold Rush, the Bear Flag Revolt, the Mexican-American War and California officially becoming a part of the Union in 1850.

Lumber and mercury mining were the predominate industries in the region and brought railroad service to the area in the 1800s, further helping it to grow. During the 1870's, Colonel James Armstrong, a lumberman who recognized the beauty and natural value of the forests, created a natural park and botanical garden which is today known as the Armstrong Redwoods State Natural Reserve. In this incredible, vast forest reserve, trees such as the Parson Jones Tree, the tallest tree in the grove measuring more than 310 feet in height (longer than length of a football field!) and the Colonel Armstrong tree, which estimated at over 1400 years old is the oldest tree in the grove, still impress visitors with their majesty.

Today, the Russian River is a vibrant and diverse community that is a favorite California vacation destination. With world-famous wineries, golfing, a full array of lodging options as well as camping and RV parks, the Russian River has grown to be the premier, natural destination and summer vacation resort for visitors from both the San Francisco area and around the world.